At Least the Excrement was My Own!

That is not a thought I thought I would ever have, or something I would say or certainly write…But ocean sailing changes everything.

Here are my exactly words from …”the incident”

At least the excrement was my own, times are tough when that’s your silver lining…

Getting off watch at 0400 hours about 2 hours away from cape hatters and 20 miles or so offshore.  It’s been a long night.  Many small things have been griping and there have been many issues I have had to tend to.    I haven’t really gotten a good off watch sleep.    We are just over 24 hours into the trip so far.  I have had to work on the anemometer 5 or so times, it keeps working sporadically and intermittently so I can’t really determine the issue.  Wiggling the wires seems to help…for a short period of time. But I have go to say without fail the worst situation ever is realizing there is a problem with the head (toilet) after you have filled it.

When I got off watch I stripped down ready to go to bed, about 0430 by the time I did the log entry.  I sat down on the micro toilet and got right to business. You cannot imagine my horror as I hit the electric macerator head flush button and nothing happened.  I hit it again and the motor whined under what I can only imagine is the strain of my two day offshore powerful poop.  At this point it was unable to macerate and exhaust overboard the excrement so the bowl just continued filled with sea water.  Even in my sleep deprived stupor I quickly realized this would turn into a much bigger mess and much bigger issue so I shut off the sea-cock letting sea water in, I continued to flush and the motor barely, barely operated.  At this point it quit and I realized it must be the switch or the motor, but as the motor is fairly new I assumed the switch.  It chose this moment to go bad, this exact moment when there is a full spinning sloshing bowl of my own excrement.  Now the switch isn’t exactly accessible, it is way back under the sink, and one thing there is not on a boat, is plenty of room, not anywhere and especially not in the head.

At this point I was able to pull off one of the wires and hot wire or bypass the switch and get the head flushing, but in order to do so I had to put my face inches away from this sloshing full bowl of my excrement so my arm could reach the switch and connect the two wires.  Luckily, we didn’t hit any particularly large waves and I was able to flush the bowl.  After which time I spent the next hour putting in a new switch.  Of course, to pull the old one out it was a left handed and blind operation, no way to see it no way to feel it with two hands.  I had a spare on board, and for the next 30 minutes I cut a new hole and wired up the new switch, which of course required different connector ends on the wires.  Not before which though I opened a container of shrink wrap that I put around the connectors and wires…of course I bumped it as we hit a wave and hundreds of these little tubes exploded all over the floor. This then becomes the most time-consuming monotonous and diabolical game of pick up sticks. 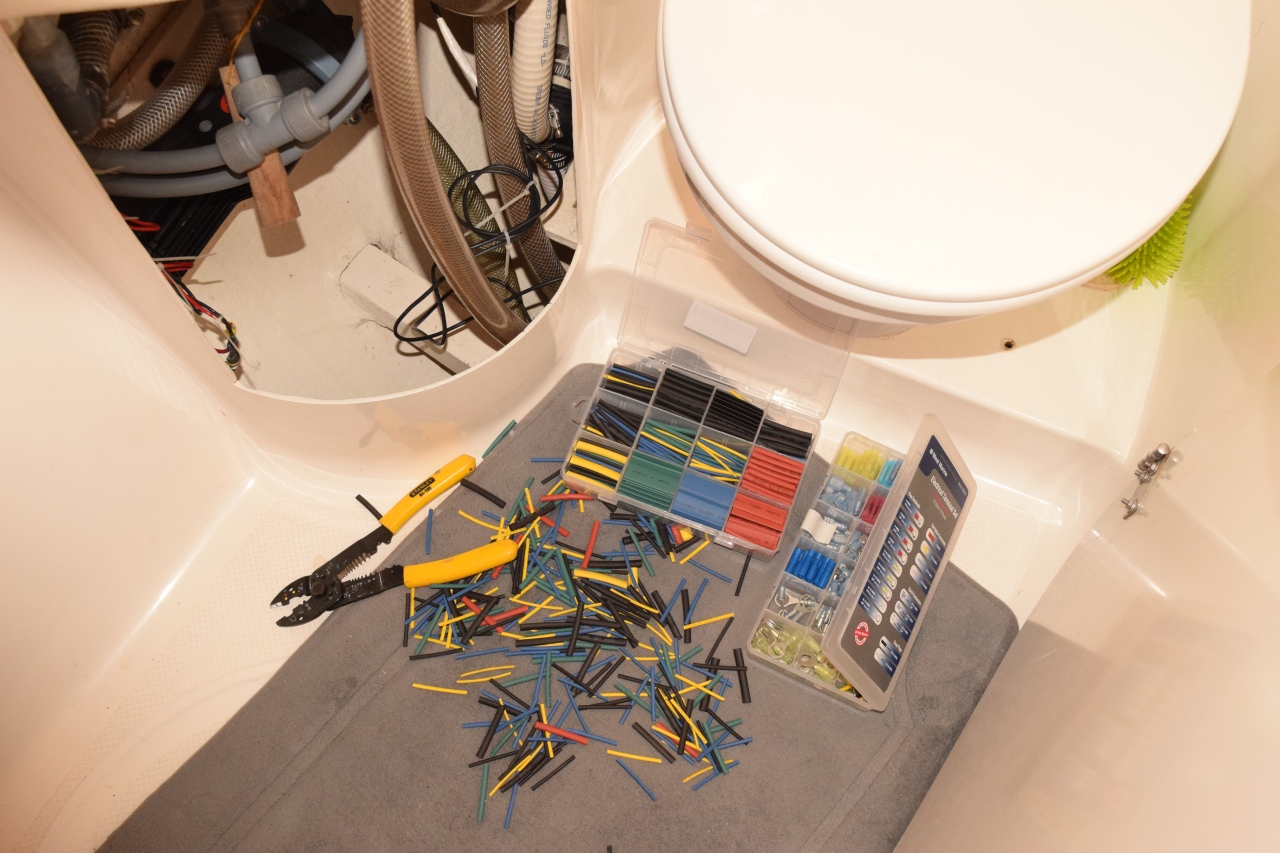 You may imagine that I did not in that moment appreciate the humor in this situation..it was as they say ‘too soon’.  Each of course a unique size and color and belonging in a specific compartment in the box…But I got it done.  It’s now 0530 and I have been off watch for an hour and a half and I am finally going to get some rack time.