Like most of the truly great ones, Apollo was mononymous, he was above taking a surname.  His 8 human years were too short, though I think I always knew he wouldn’t fade quietly into the incontinence of golden years.  He is survived by his two adopted humans, Jessie and Ridge Turner of Solomon’s Island Maryland.

Like most legends, the date, time and place of his origin is shrouded in mystery.  We believe it was on or near the 11th of January 2009.  He accepted me as his human roughly 49 days later and thus began the best 8 years of my life.

Apollo was a purebred of mixed origin. Judging from his mid sizeness, black coat and blue eyes we suspect he had both Labrador and Husky among other ancestry.  As the first undocumented Lusky, or Huscador Retriever he was an ambassador of his kind all his life, as every person he ever met inevitably asked what kind of dog he was.

As aloof, murderous, stunning, mid-sized black dogs with blues eyes go, he was peerless.  He once caused two cars to hit review mirrors as they passed each other starting at his eyes. 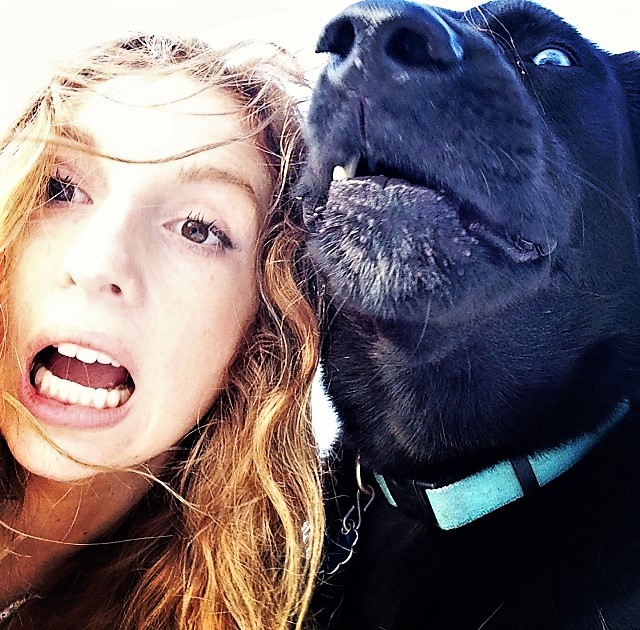 Jessie and Apollo, just one of their many photoshoots.

He was a regional celebrity, visiting our neighbors as he wished, making friends around the log canoe sailing community, Solomon’s Island’s tiki bar, and the local West Marine.  On numerous occasions, I heard people talking about him, people I did not know, saying hello to him as they walked by.  In my eyes, he was a legend and he had his own fan club.  Both his looks and his generally aloof disposition made him inaccessible and yet memorable.  He never sought out attention, never looking for pats or strokes, never from others and only from me in the most dire of circumstances.  He followed from in front of me, always ahead but never far away as we often hiked the woods together. On the many, many occasions I went into the Solomon’s West marine, they would say hi to Apollo and have a treat ready for him.  He knew exactly where they kept them and he knew which employees he could wrangle a second treat from.

Apollo was not a well-trained or a well-behaved dog.  He was impossible to control.  At best my goal was to align my demands with his desires.  Instead of sit, or stay or heel, he modified these commands to suit his needs.  He would bark when he wanted, he would sit or stay only as long as it suited him.  His obstinance was epic.  He would have the last word in any disagreement, a muffled bark as he finally complied with my pleading to stop barking or heel.  Even rollover he modified into a sort of vertical twisting motion.  He climbed trees, he jumped off cliffs, went paddle boarding between my legs, and he accompanied me sailing in the ocean in one of the worst storms I have seen.  He was up for any adventure and fearless… well almost, his only fear was being left behind.

What he lacked in manners he made up for with an unmitigated and unending need to run, to explore, to see the world.  If he was outside…he was running.  Even while performing his morning movements he could not be stationary.  He was my adventure buddy, always excited to jump in the truck and go anywhere.  He followed me aboard our floating sailboat home and never complained, not when I shaved him, (I didn’t realize that he needed his coat for sun protection and to keep him cool), not when he fell into the frozen January waters slipping off the dock into the water, and not when the air conditioning broke and the inside temperature rose to 120.  Like most pets his greatness far surpassed that of his humans.  I feel blessed to have been part of his life these last 8 years.

Apollo was a furrocous predator.  His bloodlust for small mammals was insatiable.  Though I was for the most part uncomfortable with his need to seek and destroy, squirrels, foxes, racoons, and groundhogs; I was unable to leash the beast.  Instead I had to hide the evidence and dispose of the bodies.  Only once do I recall his inability to make the kill, and that involved an opossum effectively playing opossum.

With stunning looks and a bold aloof disposition, I felt lucky to bask in his awesomeness.  I felt lucky to share his life.  He was my best friend and our lives were bound in mutual admiration.  Every day I came home Jessie would open the door and he would jump off the boat, bound down the dock and meet me as I parked.  He knew the sound of my truck and lived to greet me.

No matter what I was going through in my life, he found a way to cheer me up.  Even when it was him I was worried about.  Just a few days ago, when it first became clear to me that something was very wrong.  He laid in my lap as I stoked him and sobbed.  He had stopped eating and drinking and had difficulty even walking, in my mind all signs that the unthinkable was happening.  I cried and I told him he had to eat, he had to get strong and that I wasn’t giving up on him.  With excruciating effort, he sat up and got to his feet and he looked at me and walked over to his bowl and he started to eat.  I could tell he was in a lot of pain, but he did that for me.  He did that so I would stop thinking the unthinkable.  Even in his pain he was able to cheer me up and give me hope.  He was that once in a lifetime friend.  The one that makes you a better person every moment you spend with them.  The one that reminds you there is always a silver lining, that there is so much of life to live and that joy can come in the simplest of places.  He taught me so many many things and he never once complained.  He toughed out cold winters and hot summers on the boat, he rode out rough storms in the ocean and he always ran to the bow as we neared land, he always knew when we were almost home.  He loved me unconditionally, he changed me irrevocably for the better and my only regret is that he wasn’t here longer.  Part of me is glad he never lost his spark or his swagger.  The great ones never go gracefully.  We lost him in his prime and didn’t have to watch him fade, or suffer for long.  His end came swift and l am left trying to figure it out, trying to understand it all.  I wish I could tell him so many things, though I know I have told him them all so many times throughout the years.  He was the best listener, the best friend, the most loyal and true companion.  Always willing to play or run or have an adventure.  He brightened the lives of all who knew him and in those memories, he will live on forever.  He taught me to relish every day, to never miss a chance for fun.  He lived completely in the present and his life and spirit remind me how precious those moments are and how important it is to hold those we love close for life and love are incredible gifts with unknow expiration dates.

It has taken me more than a week to write this.  I knew when I first met Apollo I was making an appointment to have my heart broken.  Admitting this is real has not been easy.  My instinct was not to share this news, and privately I have tried to avoid confronting it.  Unfortunately, our human customs don’t effectively provide for the loss of man’s best friend, there is no funeral or wake or process to process the loss of such a dear furry friend.  He meant the world to me, and I know many others cared for him and I want you all to know his story.  He fought till the end and I believe he is waiting for me, looking back as if to say, “Come on…let’s have an adventure!”