After leaving Bimini, our plan was to make it to Chub Cay to anchor before dark, stay the night, and potentially head on out to Nassau the next morning.  Upon arriving at Chub Cay I wanted to go elsewhere immediately—it didn’t look pretty like Bimini and I honestly had never done any research on the Berrys so had no desire to stay here any length of time.  Maybe it was the fact that I was cold and damp, or that we had a hard time finding a sandy spot to lay the anchor—from what I could tell, the bottom looked like a combination of rock and sand everywhere.  Ridge would later dive the anchor and realized it was actually just grass and sand, BUT I was able to land the anchor on the tiny sandy spot I was aiming for anyway (SCORE!). After confirmation that the anchor was good and buried, we settled in the for the night.  It wasn’t until the next morning that I realized how rolly the anchorage actually was.  Surge was coming in from the tongue of the ocean and it was not comfortable.  We moved the boat late morning to a spot that we thought had the best protection from the South East, to a spot off Bird Cay.  As we were approaching Bird Cay, I was in awe of the different shades of blues I was seeing in the water. 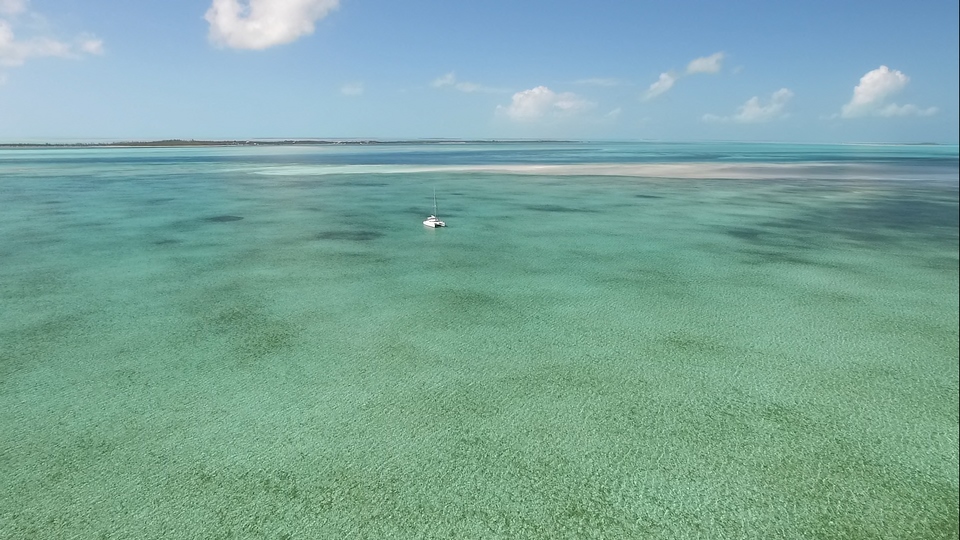 We decided to drop anchor in just over six feet of water.  It looked like we had anchored in a giant swimming pool— the clarity was insane.  From our boat I could count the seagrass leaves, spot conch, starfish, and other creatures on the bottom, I had honestly never seen anything so gorgeous.  After the anchoring was done, Ridge went back to work and I began creeping (per usual) on what was around us.  I had read that there was an abandoned estate on the island, and I could see several small buildings and a pier that were in bad condition on shore and assumed that was it.  I did see a mansion on the tip of the island but it didn’t occur to me to turn the binoculars to it for some time.  When I did…I couldn’t believe the sheer size of the house, err, compound, and it was definitely abandoned.  You almost couldn’t tell, the way the palm trees were swaying in the breeze in front, it looked like a manicured lot.  That’s when I started googling the history of the place and confirmed it was in fact abandoned. 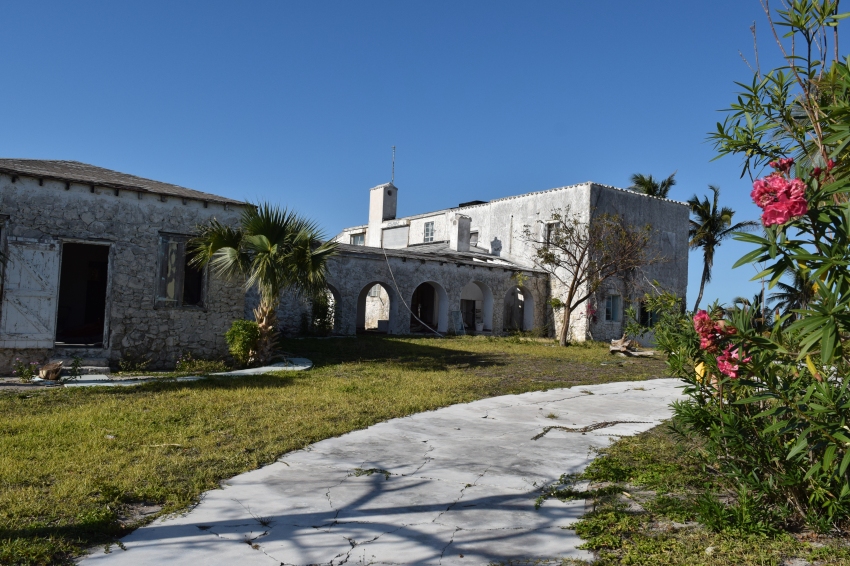 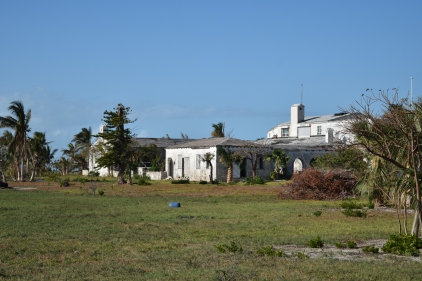 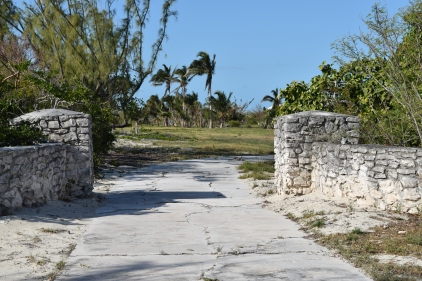 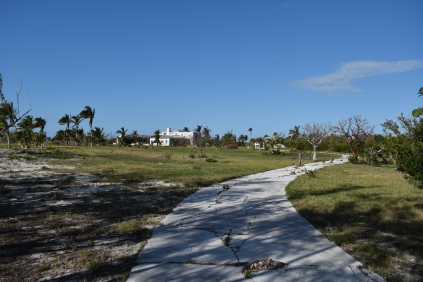 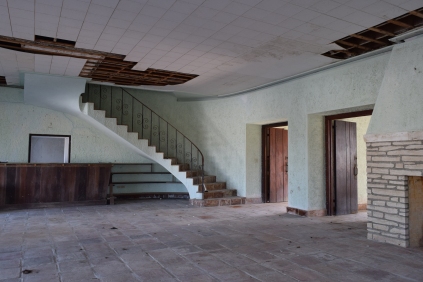 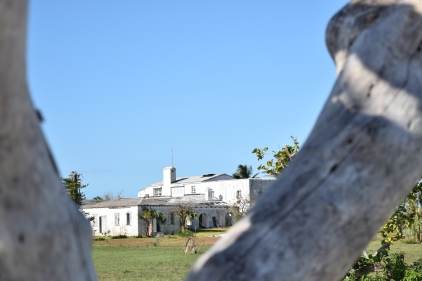 The house was built by Francis Francis in the 1940s and the land itself, was purchased from  Joe Carstairs who owned Bird Cay, neighboring Whale Cay and a couple of other islands (more to come on her later).  Mr. Francis was many things: heir to The Standard Oil fortune, an Olympian (fencing and track), horseman in the army, an incredible pilot, one of the greatest amateur golfers of the 20th century (even got an invite to play in the US Masters), and also, one of the three developers of the ejection seat.  OH, also, he owned several of the most posh nightclubs in London during WWII.  I only wish I could find photos of this estate in its prime, online.  To see it now, you can envision how spectacular it really was.  I didn’t count the rooms I went in, but everywhere I turned, there was one I hadn’t explored.  I didn’t even go upstairs because I could see through some of the floors above me (Ridge did though, and made it out unscathed).  It’s almost as though the Francis family up and left and left all of their things behind.  Canned goods and sodas remain in the pantry, (I was too scared to open the walk in refrigerator), the family christmas tree, dishes and other kitchen goods, appliances, furniture (including a pool table and piano), books, and in one of the buildings I went in, I found dishes and silverware in the sink.  It was very bizarre.  You could tell that people had been going there since it had been abandoned.  The place has been ransacked.  No drawer left unexplored and no door left closed. 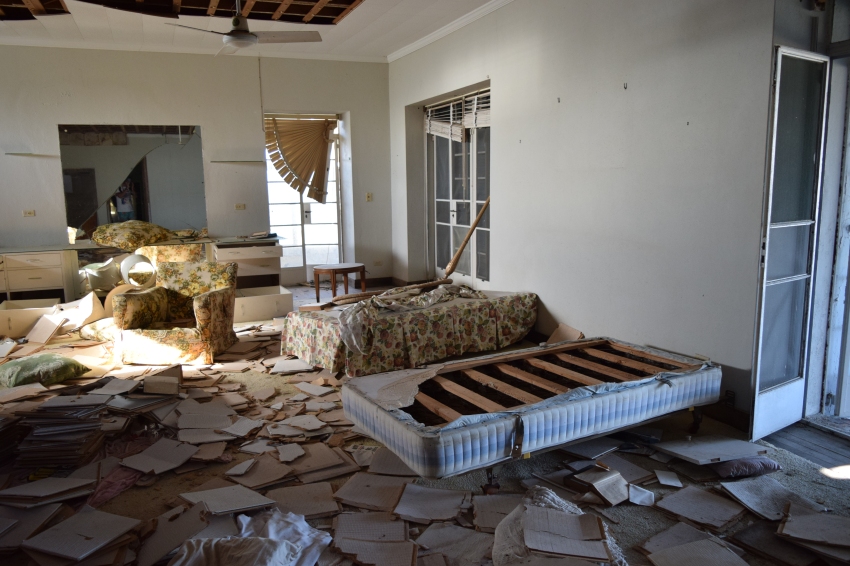 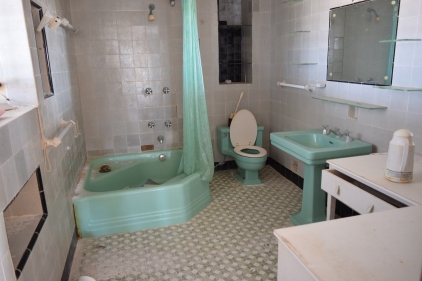 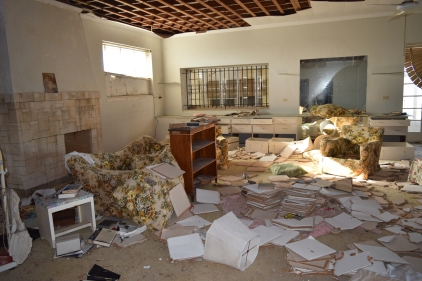 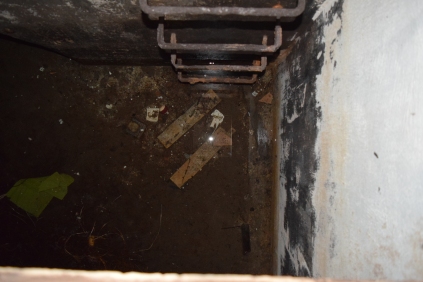 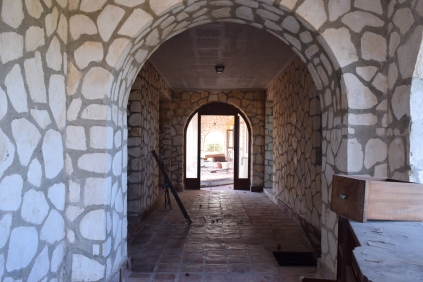 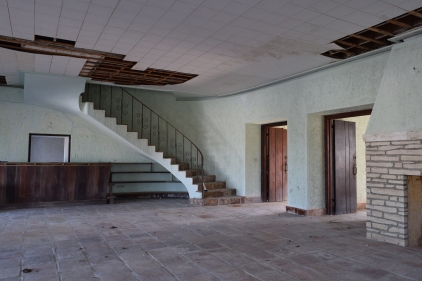 We actually ran into some very unsuspecting visitors while we began exploring, some incredibly beautiful peacocks…that’s right… there were peacocks roaming the halls of the mansion and peacock scat was EVERYWHERE. 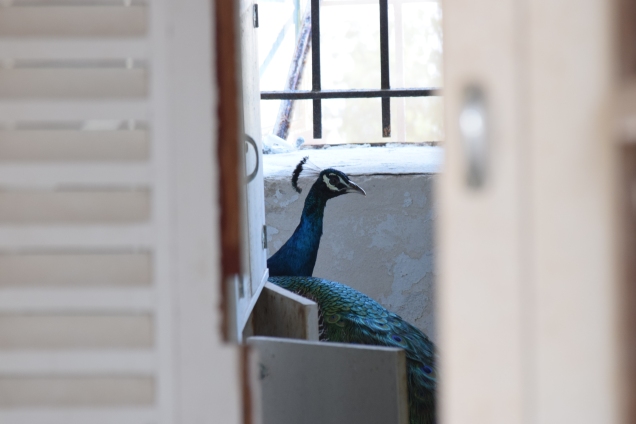 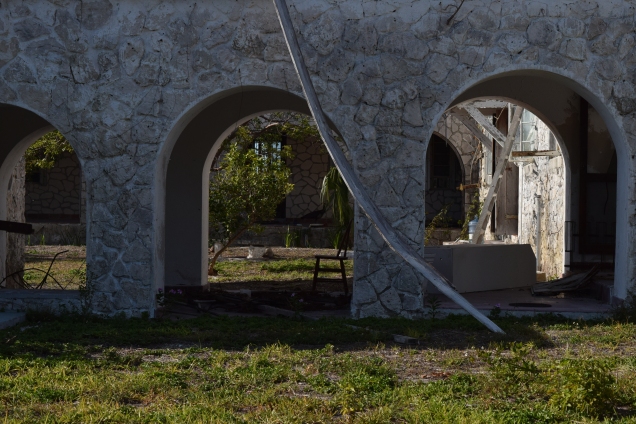 It was also overrun with tiny little lizards whose necks would puff up when they felt threatened.  It was just a truly incredible piece of property.  I cannot seem to find any information on why they left seemingly so abruptly.  Was it a massive hurricane headed for the island and they needed to evacuate?  If so, why didn’t they return for their belongings, and their peacocks  (I guess they were theirs)? I imagine it would be quite costly to remove ones belongings from such a remote location, but so many personal things seemed to be left behind.

On a side note, the holding in the anchorage was excellent, sandy bottom, but there was more tide than we expected and at low, we were sitting pretty on the bottom.  No worries though, we had no plans to go anywhere, we could have enjoyed the view for days. 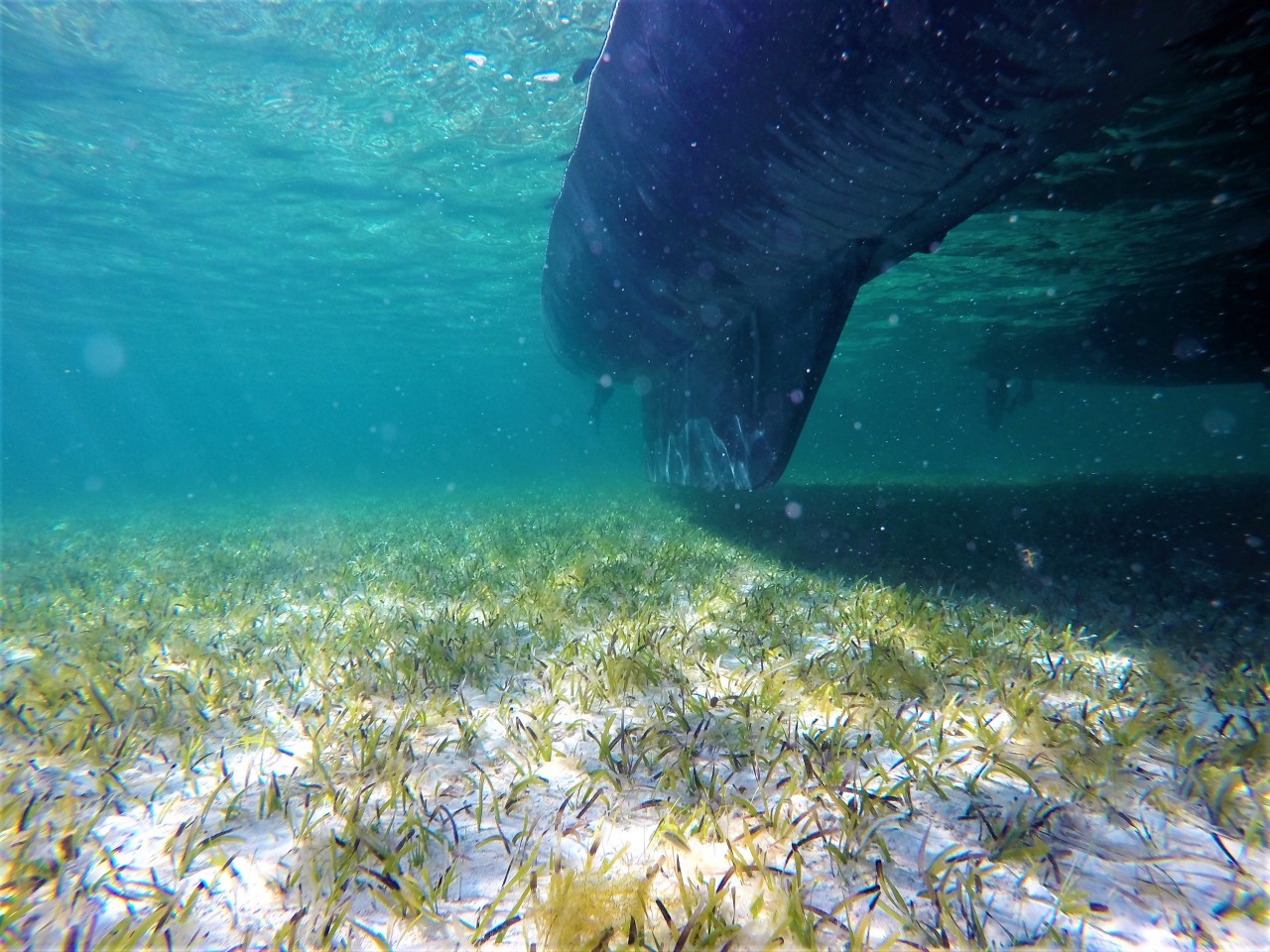 Also, the peacocks on the island at night…terrifying.  I went out to take the laundry in on the boat after dark and heard a noise coming from the dark estate,  it sounded like “HELP, HELP, HELP”—Ridge laughed and advised me that it was the peacocks.  Still had to change my underwear…it was spooky.

*As I am adding to this article, after being connected to wifi for the first time in weeks, I found online that Francis’ wife, Patricia Francis, lived on Bird Cay until 2002, when she sold the island.  That is different from other articles I had found online stating that it was abandoned in the 90’s.  I found this information on the Francis’ and their Bird Cay home from an article here:  http://www.thebahamasweekly.com/publish/news/Patricia_Francis_-_Widow_of_Francis_Francis_Dies_in_Switzerland-003718.shtml

I definitely trust this source above all others, if you look closely at the author it is none other than Mr. and Mrs. Francis’ daughter, Kim 🙂

I never thought I would find such a cool place here in the Berrys, I had been so excited to get to the Exumas, I had kind of written off the this stunning place, and I am so glad we stuck around an extra two days.  On day two we discovered another island close by with some rich history and after some digging I came to realize it was owned by Mr. Francis’ sister, Joe Carstairs, and she actually sold Mr. Francis Bird Cay, as she owned it and some other neighboring cays, as I previously mentioned.  Joe was born in London in 1900 as Marion Carstairs, and boy was she a character.  To tell you everything about this interesting character would take too long, so I highly encourage you to google her and read the book that was written about her life, “The Queen of Whale Cay”.  Here are a few of my favorite things about her:  She was openly gay, had a string of famous lovers (including Dolly Wilde (Oscar Wilde’s niece), and Marlene Dietrich), and when her mother heard rumors of her homosexuality, she gave Joe an ultimatum, get married or get cut off.  So, Joe did what any sensible person would…she got married, but struck a deal to split the money between her and her husband, and left each other after the wedding reception.  She drove ambulances for the Red Cross in the Great War (at 16 years old!) and was a world class power boat racer.  Seriously…what a bad ass.  She bought Whale Cay and transformed it, building a large house for herself, roads, a church, a store, a lighthouse and fruit plantations.  She even aided in the rescue of 47 American soldiers.  They had been drifting for 30 days after their ship had been torpedoed and she and a crew set out in the middle of the night and found them drifting 350 miles off the coast of Nassau.  One more thing, Joe had a doll that she took with her everywhere and apparently doted on as if it were her own child.  Its name was Lord Tod Wadley and when she died and was cremated at 93, he was also cremated and buried with her.   Ridge and I saw a large sea turtle swimming off of Bird Cay that I would later dub Lord Tod.  Take a look at this website where I found a lot of this information, here: https://therake.com/stories/icons/joe-carstairs/

The aforementioned article also has a couple of stories about people coming to Whale Cay uninvited that I find quite hilarious.  Ridge and I didn’t have time to make it to Whale Cay, sadly, but were able to see the abandoned lighthouse from Bird Cay.  One day I hope to head back and explore more of both islands—what an amazing place.  I have really enjoyed reading the history of both of them and I hope you all do too!

Also, you can buy the book, “The Queen of Whale Cay”, here: