$90 dollar shrimp or how not to shop in the Bahamas

After almost two weeks of island hopping South through the Exumas we made it to Georgetown.  It is a major cruising hub and at present home to over 100 boats at anchor.  It is an epicenter of the Bahamian cruising scene and an almost obligatory stop.  With access to all the facilities cruisers need, such as laundromats, liquor stores, grocery stores, trash dump, and fuel, many folks spend the whole winter here never moving once they set the hook. 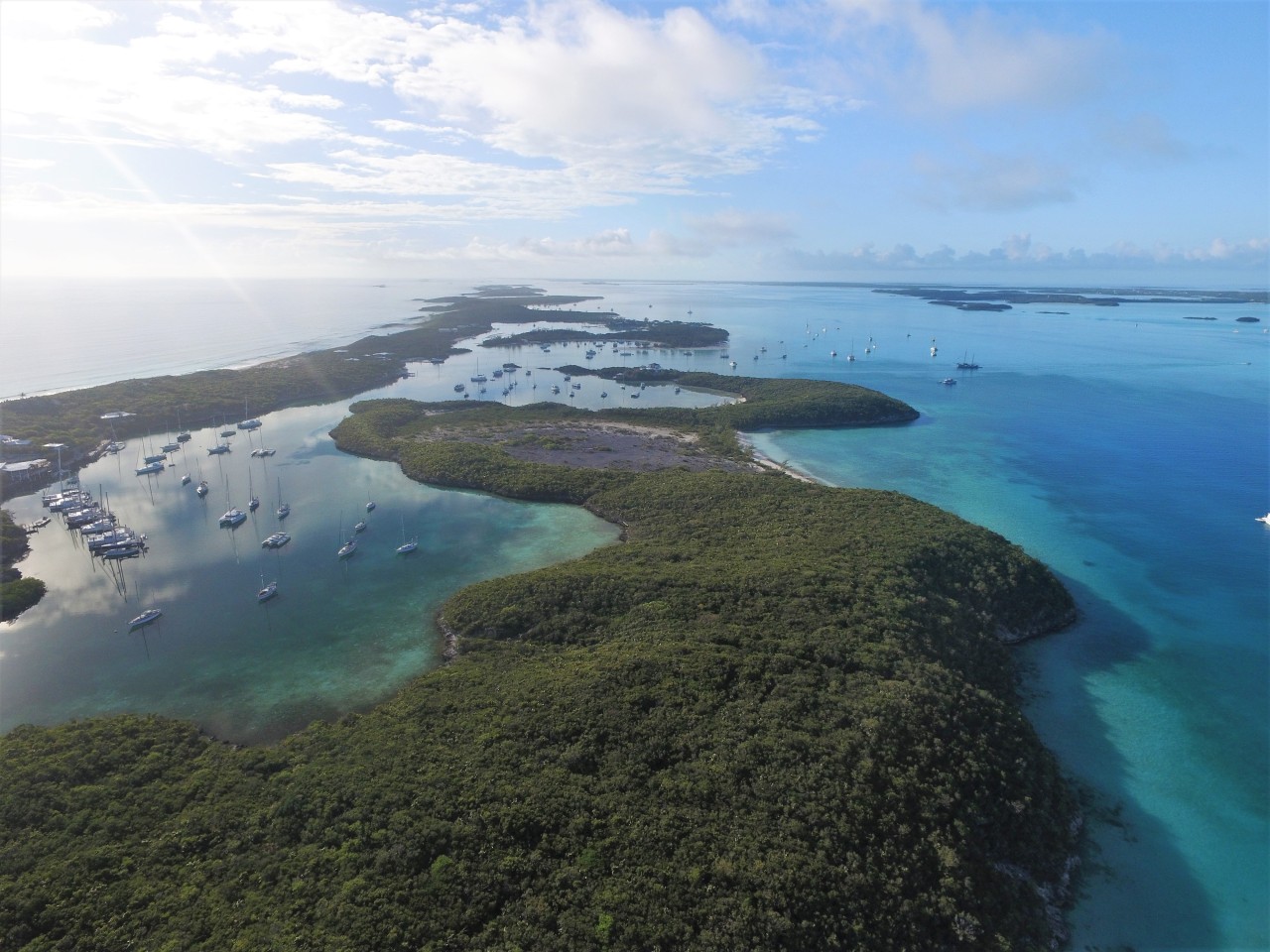 With so many protected places to anchor, Georgetown is a very popular spot for short and long term stays.

Having gotten in late afternoon the previous day after a long time without seeing civilization we were in need of supplies, clean clothes and a dump.  We decided to divide and conquer in an effort to maximize our productivity.  This would mean I would be taking on some of the pink jobs.  It was agreed Jessie would stay with the laundry and I would hit the grocery and booze stores.  This being Easter weekend and the shops closing for the next two days it was a mad house. 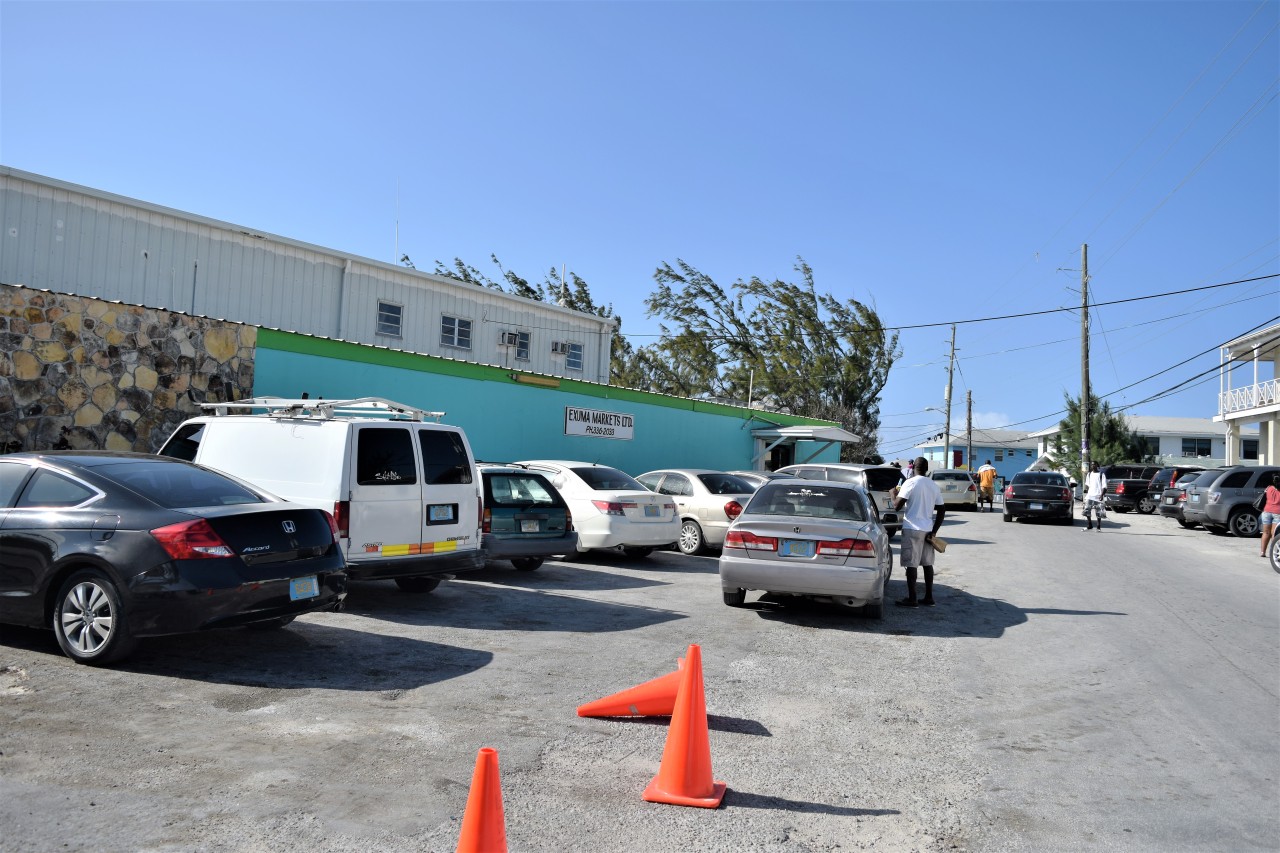 Exuma Market:  just a short walk from the free dinghy dock is on most days a great place to get what you need.

At my best I am a poor shopper.  I make every trip into a supermarket sweep event, I basically sprint through the store never glancing at a list in an effort to get in and get out as quickly as possible.  In a store I know well, with a small list of things I need, I still feel a mild sense of panic.  I abhor this activity.  It is a nightmare for me.  Perhaps I am becoming agoraphobic in my golden years, or perhaps I just am too frugal to enjoy needlessly spending money on so called ‘essentials’ like food and water.  Whatever the case…I think you see where this is going.

As I entered the odious twilight zone circus funhouse called the Exuma market I knew instantly that this would not be a good trip.  With a personal smirk thinking of Dante, I found the one available cart and began a descent into my own personal hell.  The aisles are not quite wide enough for two carts to pass, and with the high turnover of the stock each aisle had a stationery store cart full of boxes and packing.  This creates a bottleneck of sorts and necessitated the forward and reverse chain reaction I imagine atoms feel inside the sun.  An endless litany of ‘excuse me’ in at least 5 languages as we all tried to find our specific items…in much the way a group of polite sardines might continually remark to one another while being place in their can.  A quick scan of the list and I knew my task would be akin to Sisyphus pushing his boulder up the hill only to watch it roll back down for eternity.  With items like Brie, Avocados, and smoked salmon I knew I wasn’t going to deliver all the goods.  The first item was Pineapple, seemed reasonable, I actually found this immediately, problem was they were 9 dollars each, probably a fair price, but as the first item it drew my ire and I quickly scoffed and moved on.

This is my actual nightmare.  What aisle there is is not quite wide enough for even one cart to pass.

I found many of the other items, with varying degrees of success, by mid list I had become numb to the financial barbs endured by price checking.  I gave up and returned to my roots, speed shopping.  A few surprises helped, frozen pork chops (no relation to the swimming pigs of Big Majors I hope) and steaks were very reasonably priced and I was able to find some good looking tuna steaks and frozen shrimp.  As I funneled into the checkout line I saw the sign all cruisers abhor….’Credit card machine down’.  I swear this had not been the case when I entered, though if I’m honest I’m not observant at the best of times.  As I had already been to the bank and taken out $200; I thought to myself my haul might be a bit more so I asked if I could stow my cart and head across the street back to the bank and get another $200 out.  I assumed $400 would be enough to cover my half full cart of groceries.  Though I would come to regret that assumption in the end it wouldn’t matter.

I returned to my no longer frozen foods and began the checkout process with more than a few locals wishing they had chosen a different checkout line.  As the total climbed so did my anxiety.  I was committed and had only two options: if the bill exceeded my cash…put some items back (the bane of all check-out cashiers) or make a third trip to the bank.  As it turned out both would transpire.  My total came to $467.  I was flabbergasted, but with other patrons glaring and blocking my exit, I ran to the bank, but was unable to pull any more money out. Dejected I picked through the foods and returned enough of the goods to make my budget.  All the while my food sat in bags on the floor of the store, further blocking the tight space and beginning its inevitable path to spoil town.  Having returned the tuna steaks and some frozen chicken I loaded up the 80 pounds in many many small bags (reusable of course) and I stumbled with the grace of a one legged drunk penguin back to the dinghy.

I love the fishes cause they’re sooo delicious…but not 18 dollars worth.  The price to live in paradise.

What should have been a 5 minute quick dinghy ride back to our boat would be the wettest, bumpiest and most uncomfortable ride I have yet taken.  It was blowing 25-30 kts and 2-3 foot steep breaking waves came unabated.  I tried every speed to find the most comfortable and driest combination, I was eluded.  After stripping naked and putting the food away (in that order) I happened to glance at the receipt, soggy and stuck to the table.  I just couldn’t figure out what made the bill so high.  Most of the items I price checked and they were higher than normal but not outrageous.  One item had slipped my frugal gaze…the frozen shrimp.  They had no listed price….a dead giveaway not to buy them.  According to the receipt they were $43.73 per bag.  And each bag contains roughly 16-20 shrimp.  That is $87.46 worth of shrimp, or roughly $2.25 a shrimp.

A fortune in frozen seafood awaits.

I had made the most rookie mistake imaginable…I bought something without checking the price.   And that my friends is my nightmare and why I will never ever do the shopping again.  I may start breaking things on the boat, just so I have a valid excuse to avoid the trip to town next time.  I think I hear the flux capacitor acting up…

Hard to complain when home looks like this.  Ojigwan in the center.