Ocracoke Inlet and the US Coast Guard 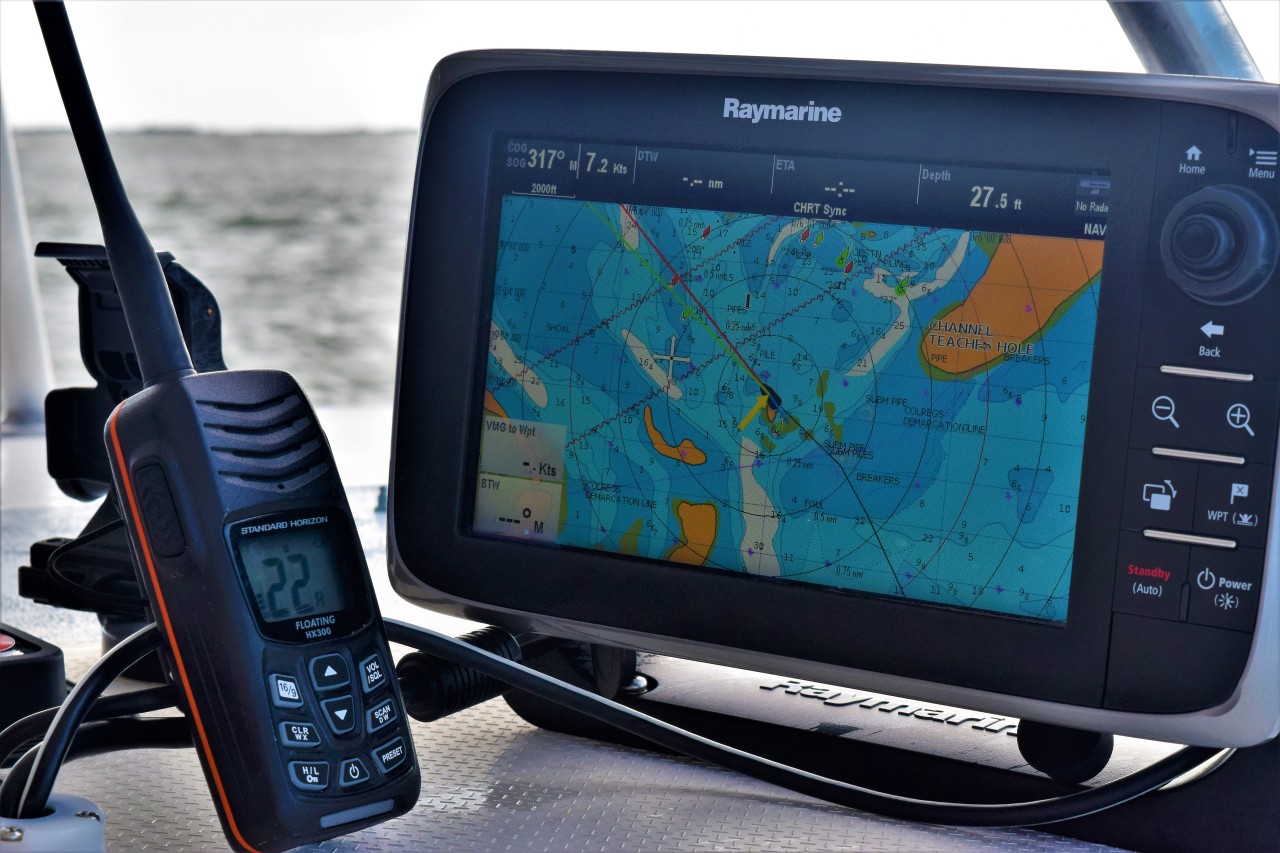 With a following ebb tide and our friend Steve along, we left Georgetown, SC and the harbor walk behind.  After a few food scraps from breakfast over the side as a parting gift to the resident alligators, we motored down a beautiful section of the Intercostal Waterway with a 2 knot current pushing us to our destination at almost 10 knots.  With a dolphin escort and sturgeon jumping feet out of the water everywhere we traveled through the pristine salt marshes and coastal lowlands headed toward the Atlantic.  Having brimmed the fuel tanks we were happy for the push, but the real reason was the current can become a major factor around narrow ocean inlets in this part of the coast.  Just a few days prior we had timed the current wrong after a 400 nautical mile trip from Palm Beach to Charleston and were only able to make 4.5 knots against the full ebb.  Every bit of fuel would be critical as our intended destination was much further than our fuel could take us, and with light winds forecasted we would need to conserve all we could.

As we reached the inlet and headed out to the ocean, the conditions became brutal.  The forecast (as usual) was only partly right.  Instead of the light So ‘Easterly predicted we had a moderate Easterly, which would be great once we turned North East, but with 2-3 knots of current going due West out the inlet and the swell and wind  coming from the East it was incredibly rough.  For maybe 15 minutes we were tossed around although just outside the breakwaters we could see the ocean was almost flat calm.  After passing the last ruins of the jetty we headed North East bound for one of a few possible destinations.  The forecast looked good to make it all the way around Hatteras and either turn into the Chesapeake or continue on Northward toward the Delaware Bay and Cape May.  On Ojigwan we like to keep things loose so we hadn’t chosen our destination yet.

With the current weather models we thought we had 3 days of light to moderate wind from the East to Southeast and if anything might have to motor some in the light stuff.  As the breeze built to around 10-12 we put up our Code 0 and saw great boat speed.  After just over 24 hours we made it to the vicinity of Cape Lookout and Beaufort, NC.  This was to be our first decision point.  We had decided that getting all the way to New England would force us to rush the passages to cover miles and potentially put us in a position where we had to sail through adverse weather and we wouldn’t get to see much along the way.  After 3 multi day passages and over 1000 miles in the last 2 weeks we decided we would just take our time heading north.  Our journey would take one of three paths.

At around 0800 at our decision point off of Beaufort, NC we hailed the Coast Guard on the radio to ask for local knowledge about Ocracoke inlet.  I honestly didn’t think it would even be possible, but I figured I would at least check. We looked at the most recent surveys to be sure, but they don’t remotely match our charts so it’s hard to follow them in real time. 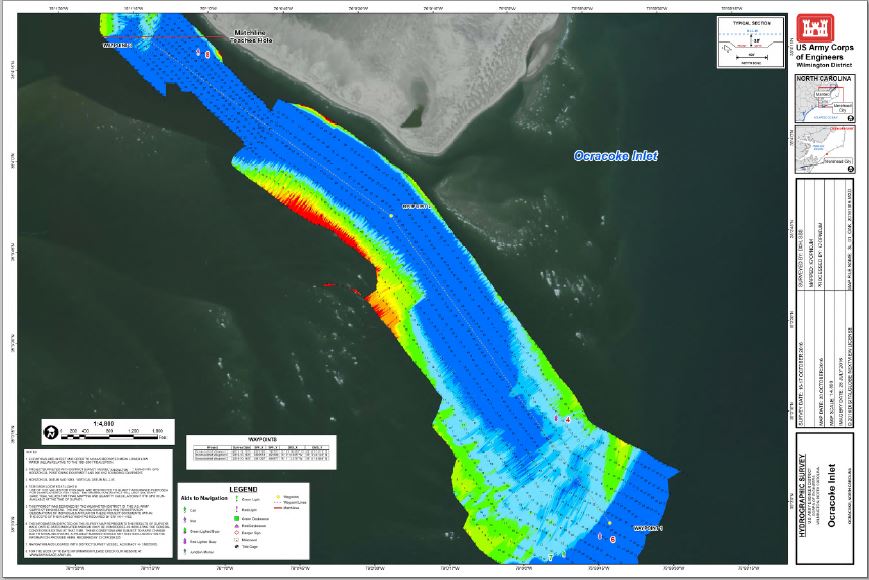 This is the Army Corps most recent survey, but when you add winds and waves into the mix actual depths and conditions will vary considerably.

The weather was light and we had started one engine to keep boat speed up.  After hailing the Coast Guard we had a few of our cruising friends reach out to us to make sure we were ok, they could hear the Coast Guard respond to us, but couldn’t hear our side of the conversation so they were hoping nothing had happened.

Armed with confirmation that there should be at least 8 feet in the channel and reasonable conditions to attempt the inlet we sailed past Beaufort bound for Ocracoke.  As usually seems to be the case, everything conspired to make the decision as hard as possible.  The wind steadily built all day, but it veered directly behind us so we couldn’t sail fast enough to make the inlet with good daylight.  The seas also began to build, sub optimal to say the least.  We put up more sail and burned some dead dinosaurs to help our boat speed and managed to hit our target speed which would put us at the approach around 5-6pm, any later and the day light would make it more dangerous than I was willing to accept.  My plan was still to call the ball when we got there.  The Coast Guard had instructed us to call them on our phones when we got close.  As it turned out T-Mobile does not have coverage anywhere in that area.

With the wind and seas building and the sun cresting right into our path we cautiously approached the inlet.  Luckily, Steve’s phone could switch carriers so we were able to get a signal.  As we hovered around the offshore maker we were unable to see the main channel buoys.  When we reached the coast guard they were very helpful explaining the approach and the even more challenging channel that leads to Silver Lake Harbor on Ocracoke.  As per usual I was pretty spent and not feeling anxious about the task ahead.  We could see waves breaking everywhere and from the chart plotter it looked really really bad, but then the Coast Guard offered to come out and meet us and we could follow them through the channel.  I had pretty much made up my mind to just keep pushing around Hatteras, but with this offer my confidence was renewed and we decided we would attempt the inlet.The CG RIB heading out to us from the other side of the breakers.  A welcomed sight indeed.

Using the binoculars, Steve was able to spot the main channel entry and we head into the sun.  These situations are a delicate balance of trusting your intuition, using the available information from the multiple charts (both paper and electronic) and reading the water as best you can.  In this particular scenario we had a strong tailwind, following seas in the 2-4 foot range, a low afternoon sun directly ahead and charts that were of no use.  Soon we saw the little coast guard RIB coming around the bar and loitering on the other side of the breakers.  It was a little strange that they only wanted to talk on a cell phone and not the radio, but I suspect it’s because they were going  little above and beyond the normal call of duty and it was better this was done off the recorded official airways.

While waiting for them to get out to us I sort of hovered in the deeper water while slowly heading toward the temporary markers.  I was faced with a tough decision, trust the outdated chart or trust the marks.  I opted for the marks and heading in through depths shown to be 6 ft. on my plotter (our boat needs 4).  In hindsight we were pushed much further in than I realized while waiting for the CG to get to our position.  Though my plotter showed we should have decent water it put us closer to a shoal than we realized and despite heading directly into the main marked channel from the offshore buoy, we soon found ourselves in the breakers. 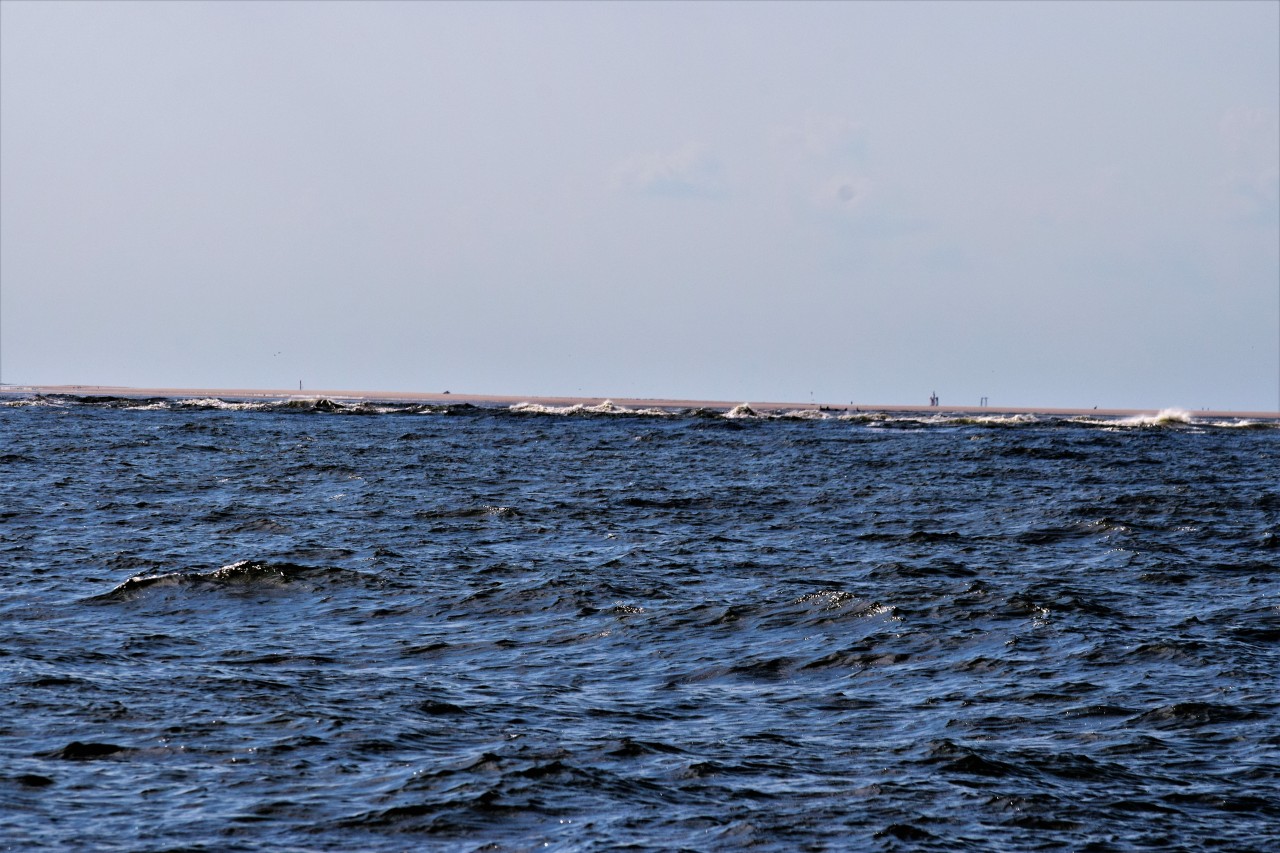 This was the view across the inlet.  The waves always look so much less intimidating from behind.

Now they felt huge.  We were tossed like a cork a few times, waves crashing over the port bow all the way into the cockpit, which is at least 8 feet off the water, incredibly at one point only showing 1.8 feet under our keels.  In only this instance the sounding was actually correct.  We manage to push hard back out toward deeper water and make our final approach through the breakers across the bar at a better angle. 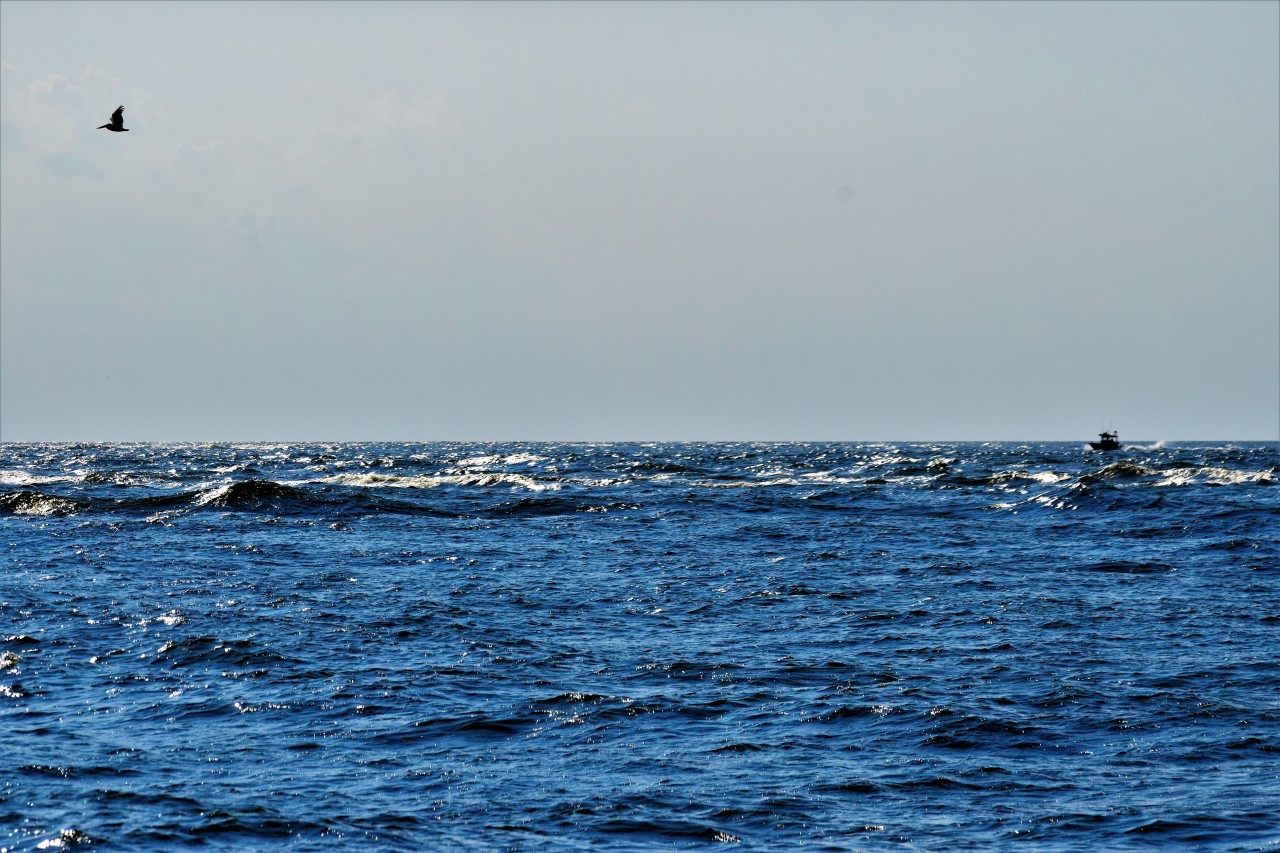 The CG RIB across the breakers.  A welcomed sight. 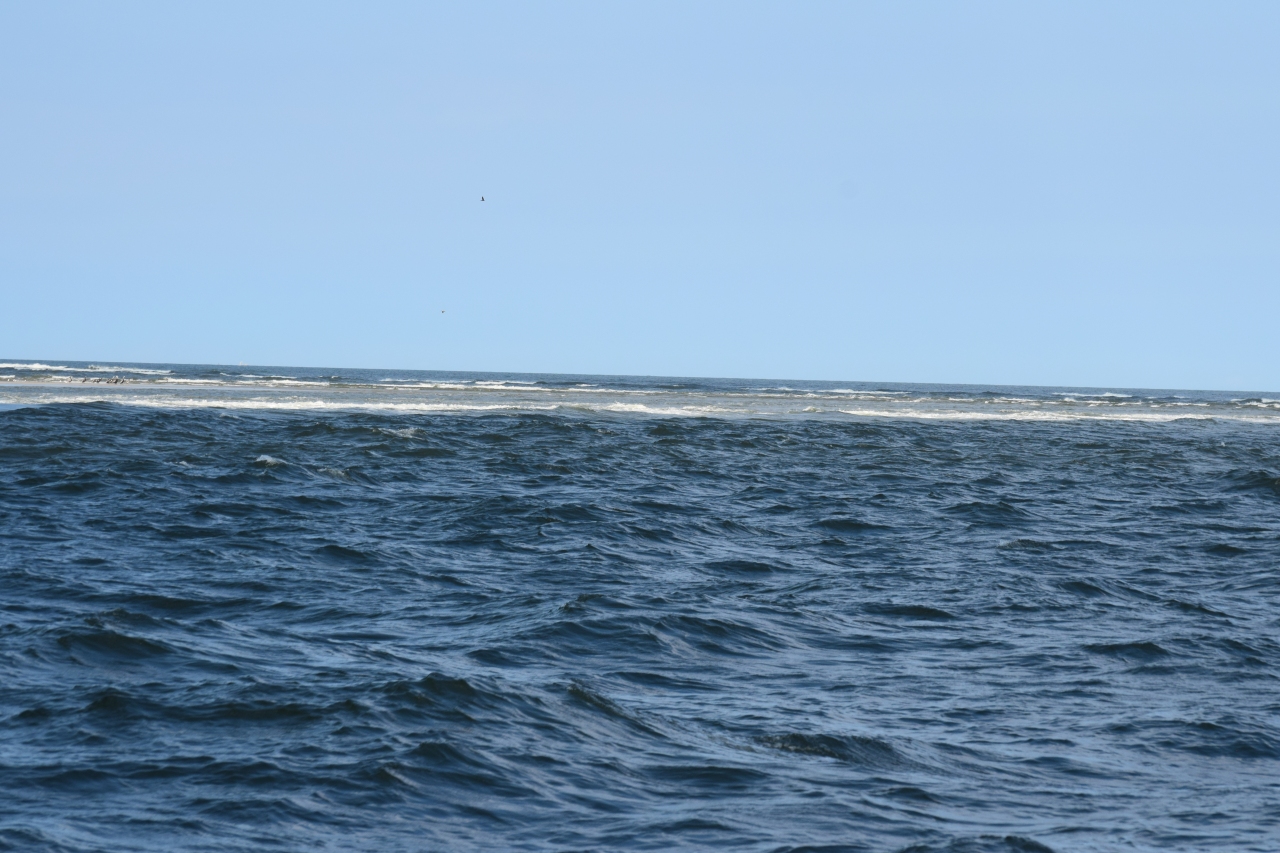 The approach comes uncomfortably close to the shallow bars and shoals of an every changing coastline. 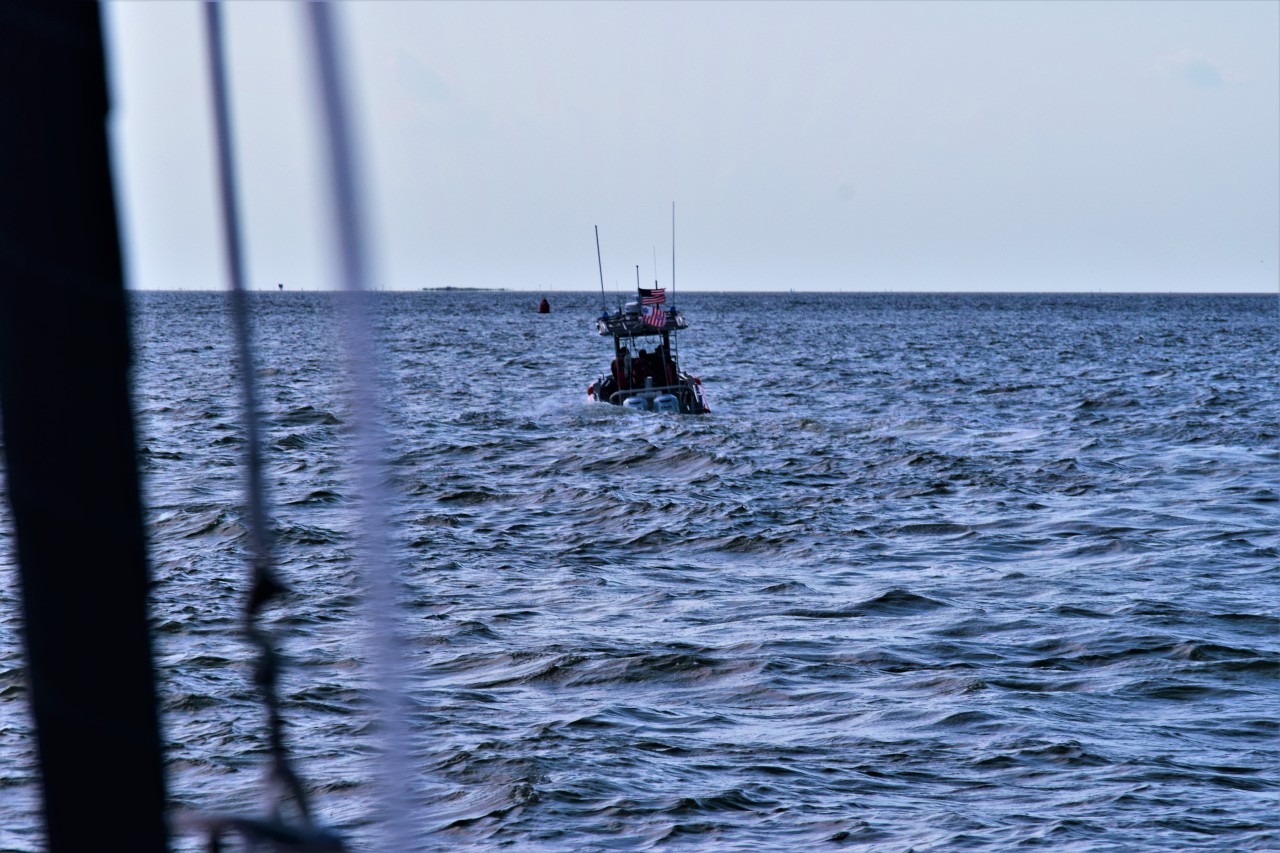 Now with the GC leading us on we felt relieved.

The only spoken words I remember were Steve asking, “Do you think we should be wearing life jackets?”  Though now out of the witch’s cabin, we were not yet out of the woods.  In front of us lay completely new shoals and sand bars and the most confusing set uf markers I have yet encountered, none of which even remotely matched the glowing screen only inches from my face.  As you may remember Blackbeard’s real name was Edward Teach and we were now following Teaches channel.  If it hadn’t been for the USGC we would certainly have run aground. At one point there were 4 floating red (temporary cans moved very often) marks in a diamond shape and a permanent green on a piling about 30 yards away.  Normally you keep the red to your right returning from the sea.  But in this case the CG boat went the wrong side of the green and then in the middle of the 4 reds, obviously the shoals had moved since the markers were last placed.

Army Corps Survey of Teaches channel.  We managed to find the deep water but this areas changes so rapidly even some of the recently moved temporary markers were no longer accurate.

Glad I could just follow them, but just as they said we never saw less than 8 feet (well except crossing the bar).  Eventually we made it to Silver Lake just a little before sunset.  We tied up and for the first time in over 36 hours I felt secure.  After a few days of not much sleep and still recovering from a cold, I opted for an early night in Ocracoke collapsing into my bunk.  What we had done was perhaps not the most prudent path, but what a payoff.  An incredibly beautiful and protected anchorage and an awesome Island community otherwise pretty inaccessible.  It felt like an accomplishment to have taken the path less traveled and though I would not have done it without some help, I felt great we had managed it. 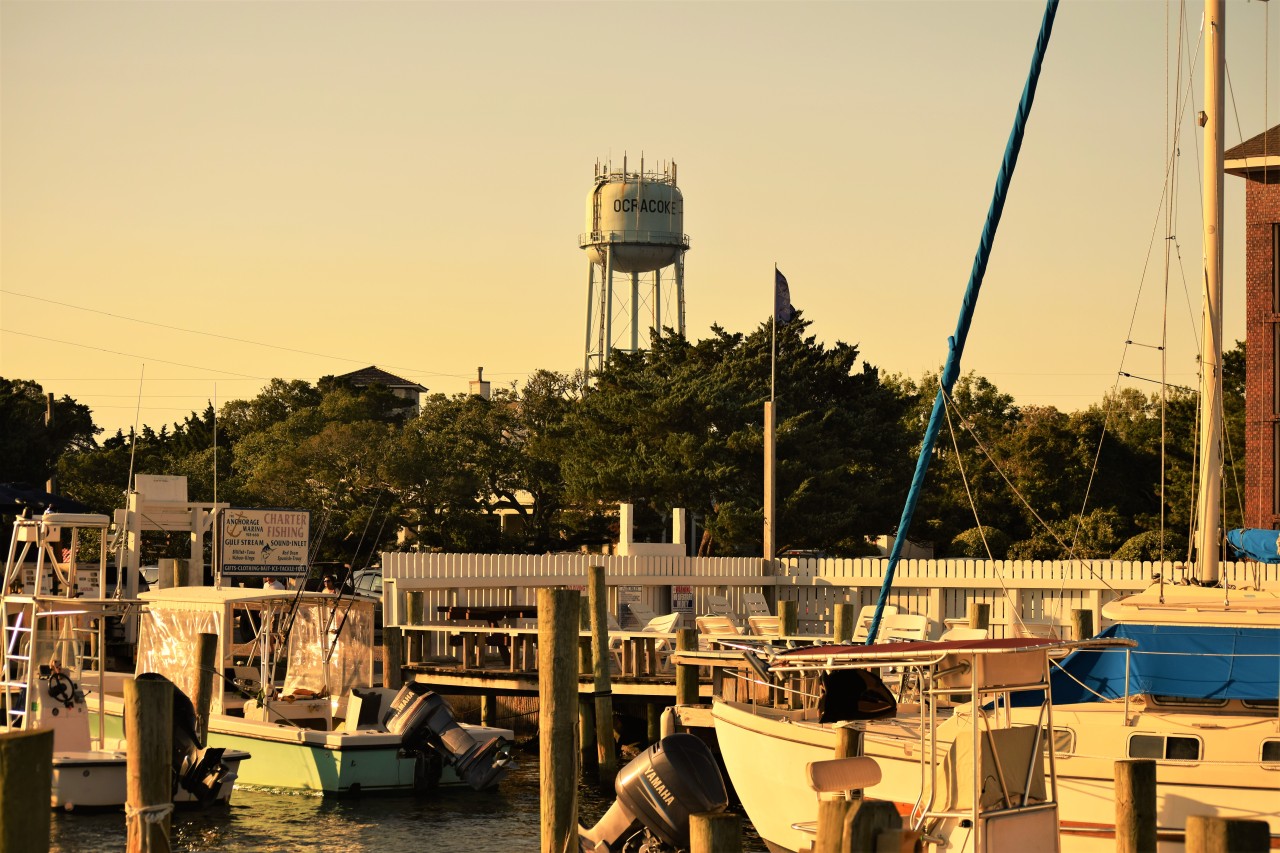 Mariners have many stories of encounters or interactions with the Coast Guard which run the spectrum, all with varying degrees of truth.  I am sure, like anything, results will vary and there are good and bad people in every organization, but I must say it gave me confidence to attempt a very doable approach, and security that if it went upside down rescue wasn’t far away.  They were true professionals and went beyond their call to assist us and although they may have thought to themselves, “It’s easier to help them avoid catastrophe than rescue them afterwards”, plus it’s probably a lot less paperwork.  Between the USGC and the Army Corps of Engineers who survey these channels constantly and maintain the channel markers, an incredible amount of work goes into making this waterways safe and accessible and for their hard ward I am grateful.